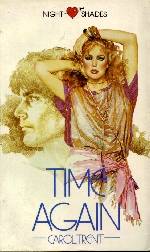 Time Again was published under the name "Carol Trent" by Fontana paperbacks in 1983. It was one of a series of romances described by the publisher:


A major new series of original paperbacks, NIGHTSHADES are contemporary novels for women - a new kind of love story.

It ends with a woman, looking into a mirror.

She's sitting at a dressing-table of dark mahogany, in a large, high-ceilinged room. Tall french windows open onto a balcony with a stone balustrade, looking out over wide lawns and a gravel drive. Sunlight is beating in, casting sharp-edged shadows across white walls and a mossy green carpet. The room is dominated by a four-poster bed, hung with rich velvet curtains. On the bed, a man lies sleeping.

The woman is aging now, but she's still beautiful. Expensive creams and lotions, set out in neat display on the dressing-table, have kept her skin clear and unlined; and nothing, neither time nor grief, can dim the glory of her sea-green eyes.

She runs a hand through her hair, noticing again how grey is invading the tumbling gold; she notices, but she doesn't care. She'll do something about it, if he ever says anything; but it doesn't matter to her. Nothing matters, except to be safe.

The soft chimes of an ormolu clock invade the summer stillness. Midday: she glances across to the bed, wondering whether to wake him, but decides against. Just a few minutes more; it's a luxury she can rarely afford now, a few minutes alone with her reflection, and her memories.

This, then, is how it ends; but where does it begin? Not here, certainly. Look... 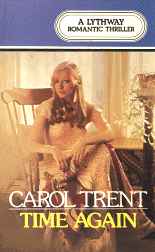 Chaz has explained elsewhere on this website how he came to write his first(ish) novel:


... I heard through the grapevine that a major London publisher was bringing out a series of contemporary romantic thrillers where they were providing the storylines, so all the writer had to do was turn a 5,000-word synopsis into a 50,000-word novel. That sounded like an easy and attractive way into writing books; I'd still never actually finished a novel, but I wrote to the publishers anyway, explaining my track record and asking if they were looking for new writers for the series. They passed my letter on to literary agent Carol Smith, whose idea the series had been, and she asked me to do some sample chapters. Which I did, and she liked them, and the publishers liked them; so I got a commission. Which of course meant that this time I simply had to finish a novel...

Carol Smith told Tangled Web the story from her point of view:


It arose out of what I was doing as an agent, seeking out new talent and helping it to develop. I was always supplying these new writers with ideas for full-length fiction because often their actual writing was better than whatever they had in hand. At that time, the early 80s, I was working professionally with horror writers like Peter Straub, Ramsey Campbell and Stephen King and was also being plagued by film companies for concepts for what was called the "four hanky" movie. Nightshades: The Darker Side of Love (originally called "the Creepy Weepies") arose out of that. Love stories with a twist in the tale. The best idea, they told me in Hollywood, since The Twilight Zone. Bantam in New York and Collins over here both commissioned the first ten novels based solely on the series concept plus the plot synopses I provided, all written by myself. At that stage, no authors. I was able, therefore, to give writers a proper contract with a healthy advance and an approved storyline, with the promise of certain publication by two major paperback houses. It was all tremendous fun. Twenty-two titles were published in all and it was only market changes that halted it.

Or, as Chaz puts it:


Took me three weeks. Carol loved it, publishers loved it; it came out (under a pseudonym, and I'm not telling) when I was twenty-four, and the whole series instantly flopped. I honestly don't think it was my fault, but then I wouldn't, would I?