Every day, when he went fishing, he took the Fishing Stone with him, wrapped in an old cloth and tucked inside bis shirt. Even through the layers of cloth, he could feel the coldness of it against his skin; and sometimes he smiled to himself, glad to have it close to his heart, his own very private secret.

When he came to the river, the boy found his favourite spot, where the water was shaded from the sun by an overhanging tree. There he would drop the Fishing Stone into the water, and wait. He could see the green stone quite clearly, lying on the sandy bottom. He watched carefully; and he didn't usually have to wait very long. 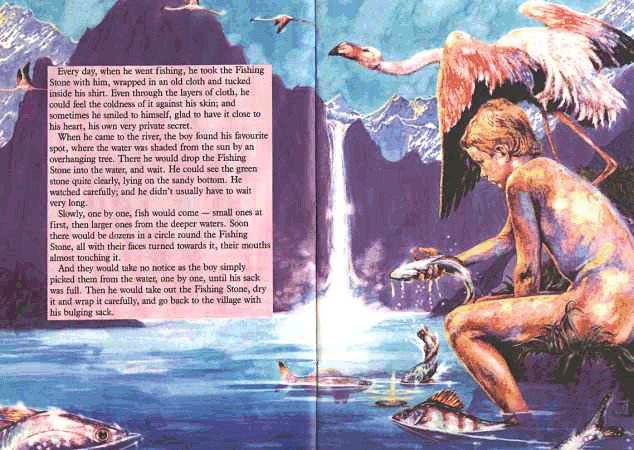 Slowly, one by one, fish would come - small ones at first, then larger ones from the deeper waters. Soon there would be dozens in a circle round the Fishing Stone, all with their faces turned towards it, their mouths almost touching it.

And they would take no notice as the boy simply picked them from the water, one by one, until his sack was full. Then he would take out the Fishing Stone, and wrap it carefully, and go back to the village with his bulging sack.

He had always made a secret of the Fishing Stone, his little magic, because it was a thing, and not a word or a song that only he could sing. He was frightened that someone bigger than he might take it away from him.

The boy was often unhappy, and always, always lonely.

One day, he went for a walk by the sea. He had the Fishing Stone with him as usual, and as he stood on the beach, watching the waves run up the sand, he had an idea.

"There are fish in the sea," he said to himself, "many fish, far bigger than the ones I can catch in the river. If I could take a big, tasty sea-fish back to the village, that would show them how strong my little magic is. Then they'd speak to me and give me a name, I know they would."

So he clambered out across the tumbled, seaweed-covered rocks, until he stood as far from the shore as he could get. He was above the deep water now, and great waves battered just below him.

"I mustn't drop the Fishing Stone in here," he thought. "I'd never be able to get it out again. But if I just hold it in the water, that should be enough."

He lay down carefully on the slippery rock, and lowered the Fishing Stone into the sea. The water was cold, and the waves were strong; he could feel them tugging, trying to get the stone away from him. He tightened his grip, wincing as the sharp edges cut into his fingers but determined not to let go.

Back to Writing for Children or return to home page


An extract from The Fishing Stone by Chaz Brenchley, illustrated by Graham K. Griffiths.
Published by Arnold Wheaton, (UK, 1988).