The Making of Taipei Charlie

I'm not a travelling man, famously so (ask my friends). I've made not a virtue but a character flaw from staying home, not speaking airport, harbouring grand neuroses about what would happen to me if I strayed into funny foreign parts where they don't speak English.

I have a thousand reasons for self-contempt; that's always been a big one. So when an invitation arrived to spend some part of the winter in Taiwan, of course I had to go. How not? I have just enough pride not to want to be the person that I am, to elect not to see myself in the terms that undoubtedly apply. Thus, I do not want to be the sort of person who turns down the chance to go to Taiwan, simply because the very notion of it scares me spitless; thus, I say yes - though with an unexpressed relief that late approaches and prior commitments mean that I can only go for two weeks, rather than the two months I was originally offered.

Besides, I am also famous for finding many reasons not to work (again, ask my friends). I cling to Charlie Brown's motto, "No problem is so big or so complicated that it cannot be run away from"; running to Taiwan is the furthest I've ever taken this... 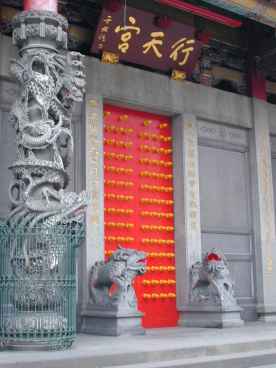 The invitation came from the Cultural Affairs Bureau of Taipei City, to be a writer in residence, duties not specified - another opportunity for my imagination to run rancid, given that I lack the sense actually to ask what the job entails. I jitter magnificently, till the day of departure. Then up at 4am (an hour I'm only familiar with from the other end, being still up at 4am - it looks very different from this angle, and I don't like it half as much) and off to Newcastle airport, a swift hop to Amsterdam and a couple of hours to write postcards of the "Help! I'm actually doing it!" variety and jitter some more (hey, I've already had one deep-vein thrombosis, and I wasn't anywhere near a plane at the time; of course I'm going to die mid-flight, and I forgot to make my will, damn it, who's going to look after the cats...?) before the Taipei flight is called.

Seventeen hours later I haven't died, but neither have I slept. Read a good book, watched a bad movie, wriggled my toes a bit and wondered about the sluggishness of my blood, but didn't copy those other passengers who were pacing, stretching, virtuously exercising in the aisles. I'm far too fatalistic to take precautions, in clotting as in all things else. Que sera sera, and usually because I let it; pro-active is far too ugly a word to have any place in my vocabulary.

So off the plane, through immigration and customs, huge relief to see somebody holding up a huge sign with my name on it. I am greeted and photographed being greeted, we fight politely over my bags (somehow, it's the duty-free whisky that I get to keep...) and go outside in search of a limo. Uh, the guidebook said that winter in Taipei would be grey and chilly; I have brought my big winter jacket. Should've listened to my mother instead; unnatural parent that she is, she said don't wrap up warm, you won't need to. Hot sunshine, sticky air, thank God for air-conditioned cars...

Off to the hotel - and yes, it's true, they really are putting us up in the Ritz Landis. This at least I can live with. But I get no time to relax, no time even to change or shower; we have to hustle, we're already late for a press conference. My heart sinks exceedingly. Never done one of them, never wanted to even when I'm sharp and together; right now I haven't slept for a day and a half, I'm worn out with doing nothing and this is not the kind of new experience I've come for.

It has to happen, though, so off we go - and it's only when we arrive, when we walk in, that I find out I'm not alone out here. There are a dozen writers from all over the world, from Guatemala to Korea; it's not a residency, it's a colloquium of sorts. And most of 'em speak English, and there are translators on every hand for those who don't and actually, hey, this may not be so awful after all... 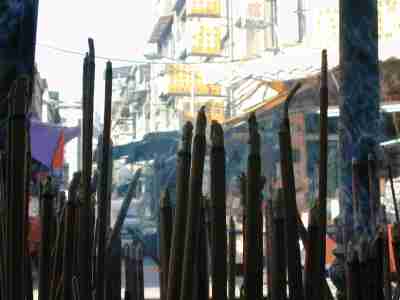 It's, oh, all of two days later that I first hear myself saying I want to come back; a day after that, I start making the arrangements.

Next: Charlie in Taipei

Back to Taipei Charlie menu