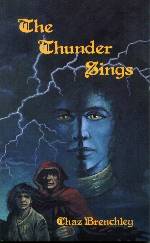 Dale followed Lyssa out of the market-place, ducking up a narrow alley between two storehouses. A watchman shouted at them, and waved them on; Lyssa caught Dale's hand and tugged him quickly round the corner.

"Here." It was a dark corner she brought them to, a blind alley between two high walls. Shadows lay thick as dust across the stone; it would be high summer before even the noonday sun poked its way down here. Lyssa dropped back against one wall with a sigh, stretching weary legs out along the ground. Dale stood beside her, running his finger over the stonework with wonder on his face.

"What?" Lyssa looked up at him, puzzled.

"All this. It's so fine, so carefully made - just a storehouse, and all of stone! My old lord's hall, half of it was made of wood. And even where it was stone, the walls weren't cut smooth like this, they were just left rough."

"Wait till you see a palace before you speak of fine work, storm-lordling." Lyssa chuckled, once again easy with him now, able to make a joke of his powers. "Garth Holm, and the high towers above the sea. There's fine, now."

She pulled him down beside her, and pressed an apple into his hand. "Eat, and let me think."

"Where did this come from?" Dale turned the apple over in his hands. "We ate the last of our food this morning, before you sang the shadow-web."

"I took them from a barrow, in the market. One each." She held up her own apple, and bit into it. "Beg a little, steal a little. Remember? Now be quiet."

Dale settled himself comfortably in the cool shadows, and chewed on the apple. Before long, he heard voices approaching. He touched Lyssa's arm warningly, and neither of them moved as two old women passed slowly by the mouth of the alley, going home from the market.

"And those storms, away to the west!" one was saying. "Weeks of them, there've been. Spring thunder, my son says, but..."

They moved on, and thick stone blurred their voices; but Dale had heard enough. He grinned delightedly, and Lyssa thumped him on the arm.

"Spring thunder, indeed!" she muttered. "I wonder what she'd say if she knew it was only you, playing games?"

"Not games," Dale said emphatically. "I was learning, not playing."

"Testing your strength. I know. But some of it was fun, too."

Dale smiled, remembering trees and rocks split by the lightning he called down, hills that echoed and echoed again the songs of the thunder. He flexed his fingers, thinking that there was no wall now that could keep him from what he sought.

"Beggars," Lyssa's voice said in the darkness. "Beggars know everything that happens in their city. We'll ask the beggars."

"Will they tell us?" Dale was doubtful; slaves knew everything too, but they kept quiet in the presence of strangers.

"We'll find a way to make them. But we've got to find them, first. I don't know where they go at night, in Calinor. Not round the storehouses, though; too many guards. Come on, we'll try down towards the river."

They got to their feet, and Lyssa crept along the wall towards the alley's mouth, with Dale following. Before they could reach it, though, they heard booted feet tramping on the cobbles, and saw the reflected glow of torchlight on the walls.

"Patrol!" Lyssa hissed. "Back, quick..." They scuttled back to the furthest corner, crouching like wary cats against the stone. Every muscle in Dale's body was tight and tingling with nerves. His mouth was suddenly dry, and he hardly dared breathe for fear of being heard.

The patrol stopped at the head of the alley; and flaring torches trapped the two of them in a harsh, guttering light.

"Yo-ho!" a rough voice said, with a gloat in it. "Two more due a flogging, I fancy. It's a good catch tonight. Fetch 'em out, corporal."

Three bulky men moved down the narrow alley towards them. No good hiding now, and nowhere to run; Dale sprang to his feet, with Lyssa a moment behind him.

"Not the storm, Dale," she whispered urgently. "Not here. You'd burn the whole city."

He nodded, with a touch of impatience. He wasn't thinking of lightning. His eyes narrowed in concentration, and he gave a little twitch with a finger of his mind.

A whirling wall of wind swept down the alley in front of him, air turned almost solid with speed. Torches were whipped away and flung far across the city in a trail of sparks; and the soldiers themselves were tossed to the ground as though they were no heavier than reeds. Broken reeds now, Dale thought, hearing them grunting and groaning in the darkness ahead. But he and Lyssa could still not slip past them unnoticed; and whether the soldiers were all hurt too badly to stop their escape, he had no way of telling. It didn't seem very likely, though.

Behind them, a voice said, "What indeed?"

Back to Writing for Children or return to home page


An extract from The Thunder Sings by Chaz Brenchley, illustrated by Ray Mutimer.
Published by Arnold Wheaton, (UK, 1988).