Some Thoughts on Pork

In this country, alas, as in so many others, pork is the most abused and misused of meats. It is both undercooked and overcooked, which is a clever trick if you can do it, and we can.

It's undercooked in quantity, because there are so many people who won't eat it for reasons of religious, cultural or other prejudice; it's overcooked because those who do eat it labour under the misapprehension that if it's pink in the middle it's going to poison them. So they roast or fry or grill it until there's no flavour and no succulence left, and then they're disappointed that what they have on their plate is so dry and dull.

Let me put on my missionary hat, and persuade you to treat the pig as it deserves to be treated... 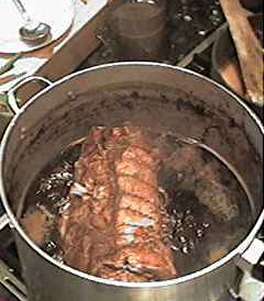 First, find your pork. This isn't easy, but it is worth while. The stuff that's factory farmed, shrink-wrapped and sold on polystyrene trays in supermarkets is a waste of space, time and money; have no truck with it. Seek out a decent butcher who sells free-range English pork, preferably from named breeds; a pig that lived happy and died unstressed will yield far better meat. The same applies to bacon. Don't touch anything Danish; proper bacon does not ooze milky-white liquid into your frying pan, nor should it be saturated with antibiotics and chemical preservatives. There are still specialists out there who use traditional dry-cures, and the difference is extraordinary.

Oh, and one more thing - don't be afraid of fat. Pork should be fatty, that's where the flavour and the succulence lie. Crackling is a gift from the gods, of course, but so is pork-fat in other conditions. More of that anon.

A few recipes, tasters from the Brenchley kitchen:

Saturday morning is famous only for being the sequel to Friday night, and hence spent largely in a huddle under the duvet, accompanied by whimpers. Everyone has their own way to approach this problem; here's mine, a happy variation on the classic bacon and eggs.

"Go get dressed, and I'll fix you breakfast. What do you want?"
"What have you got?"
"Everything. Cornies, muesli, Fruit 'n' Fibre; toast and marmalade, toast and honey; Woodall's, of course, and free range eggs to go with..."
"What's Woodall's?"
Her hands were still, fractionally; then, "You told me about Woodall's. Best bacon in the known universe, you said it was to die for. And I said only if you were a pig, and you snogged me. First time of snogging, that was..."

Drink a pint or two of strong black coffee, and wait to be hungry. This should occur around midday, which is perfect timing. Head for the kitchen, and begin to boil an egg (that's a free-range egg, natch). What you're after here is a solid but not rubbery white and a yolk that's semi-soft, still runny in the middle. Despite the accursed Delia, there is no precise formula for this; every cooker is different, every saucepan and the size of every egg. In my kitchen a large egg takes three minutes at a gentle boil, but you will need to experiment. The joy of this particular meal is that it doesn't matter if you mistime it; a hard-boiled egg is fine, and a soft-boiled one likewise. It's just better half-and-half.

While the egg is boiling, take a couple of slices of decent bread (brown or white, your choice, but not plastic pre-sliced supermarket stuff, please), butter them and spread with mayonnaise. [Helman's is okay, but making your own is easy with a food-processor. Break three eggs into the bowl, add salt, pepper, a teaspoon of mustard powder and a couple of tablespoons of wine vinegar. Give it a whizz, then leave the machine running and dribble in a pint of oil, half olive and half groundnut or sunflower. If you won't use that much, then add onion, parsley, capers and gherkins to the remainder, whizz all together and behold! Tartare sauce...]

Fry a dozen bite-size pieces of bacon until they're positively crunchy. Don't grill 'em, grilling is cruelty to the pig, and in any case your stomach needs the fat. Let me stress again, use good bacon if you can. Remember you don't need proper rashers for this; any good butcher will sell you the rag-ends of a flitch for cheap.

Shell the egg, place it whole on one slice of the bread and rough-chop it in situ, so that the yolk oozes into the mayonnaise. Add the bacon, grind black pepper over the top (there should be enough salt in the bacon, you won't need more), slap t'other slice on top and carry through to the living-room with a hot mug of tea. Switch the telly to BBC1, and lo! You're just in time for Football Focus.

If it doesn't ooze all over your fingers while you're eating, you haven't done it right. Next time use more mayonnaise, and perhaps a second egg.

This is quick, easy and gorgeous. Put a hunk of butter and a splash of oil into a frying-pan, and set over a medium heat until sizzling. Add pork steaks, and fry till the fat is translucent and the flesh is still moist and a touch pink. How long will depend on the thickness of the steaks; it's okay to cut one open to check, if you're uncertain.

Put the steaks on a warm plate, turn the heat up and toss some sliced mushrooms into the pan. Wild mushrooms are terrific, exotic varieties are great, simple buttons are fine. Fry them fast, and pile 'em up on top of the pork.

Splash a little Calvados or apple schnapps into the pan to deglaze, then add an unhealthy quantity of cream. Salt and pepper, stir, and pour over all.

Serve with new potatoes à la Chaz: fry onions in butter & olive oil, in an ovenproof dish with a lid. Add the potatoes, chopped small; season with salt & pepper; put the lid on, and transfer to a pre-heated low oven (in my lexicon, ovens have three temperatures: hot, medium and low). Leave them entirely alone for an hour or so, and then eat. For variety, you can add garlic or herbs - parsley, thyme, chives. Experiment. That's what food is for.

If you must roast a joint of pork

...So David and Jackie came home to roast pork and baked potatoes with a sharp sauce of blue Stilton and soured cream, and a rich chocolate soufflé to follow: and to hell with David's diet.

...then twenty minutes to the pound plus another twenty is ample. And try serving it with a stilton-and-sour-cream sauce: take a couple of tablespoons of fat from the dish at the end of the cooking process, while the meat is resting somewhere warm (you do rest your meats after roasting, don't you...?), and put in a saucepan. Add the same amount of water, set over a low flame and bring to a simmer. Add a carton of sour cream, and lots of crumbled Stilton; heat till the cheese melts, but don't boil. Add pepper. Yummy.

This is to die for. It should be served as the focal point of a banquet, following soup and other dishes, accompanied by rice and noodles and pak choi or other Chinese greens. You have to go to town and pig out on this one, or there's simply no point.

Take a hand of pork (other cuts will do, but the hand is optimum; five or six pounds' weight is your target here, and it must be on the bone), place in a large pan and cover with water. Bring to the boil, and skim off the scum; then reduce to a simmer and add the following: rice vinegar; rice wine; light soy sauce; dark soy sauce; rock sugar. Be generous.

Simmer the pork gently for six or seven hours (yes, honestly). Keep the liquid topped up so that it covers the meat until the final hour; then reduce it until you're left with lots of sticky, glutinous sauce. Taste for flavour; if it isn't sheer heaven, then add more of whatever it needs until the balance is right.

Decant onto a large plate, and bear through in triumph. You will not need to carve; your guests will be able to tear it apart with chopsticks. Do encourage them to eat the fat as well as the meat, it'll be gelatinous and delicious, quite unlike anything they have ever eaten before.

Back to Cooking with Chaz or return to the home page.