The Year of Living Differently 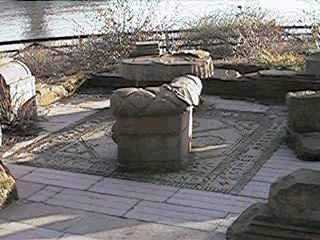 What goes around, comes around. Everything is cyclical, but some things are more cyclical than others. You get two seasons a year, or four, or none at all, depending where you live; but never mind the weather, constellations come and go overhead with relentless regularity. Planets run on rails. On a more domestic level, systole and diastole, your blood sustains its constant circulation. There's something fundamentally fractal about this: doesn't matter how far in you go - electrons orbit their nuclei, or they did when I was at school - stuff still engages in a known process along a known route. Matter is nomadic, I guess; movement matters.

No surprise, then, if what saturates the physical world should also saturate our mental maps, our emotional progress, our relationships with each other and with the world at large. All of that, though, is a long way of saying this: that your average freelance writer tends to undergo crises on a more or less regular basis. Mine are as predictable as comets, on a three-year cycle. Financial desperation overspills into brutal depression, and when I'm depressed of course I can't work, so the finances get squeezed still tighter and the snake just feeds itself.

What is surprising, though, what catches me out every time is that Mr Micawber was right in his perennial optimism; something always does turn up. Usually out of left field, the direction you're really not looking for help because why on earth would you expect to see it there?

Specifically, back in '93 I was well tangled up in disaster. I'd just finished a dreadfully long book that was necessarily dreadfully late in delivery, so I was of course dreadfully in debt. The best offer my publishers had come up with for the next wouldn't even pay off that debt, let alone support me through another year of writing. Bankruptcy loomed like a very loomy thing; I was in despair, far beyond expecting any kind of rescue.

And then suddenly one morning my telephone was hot with people, calling from all over. Had I seen the Guardian that morning? No, of course I hadn't, I couldn't afford a daily paper. Well, they all said, it's got an advert in it, Chaz Brenchley Wanted.

So I raced off down to the library to have a look. What the advert actually said was Crime / Thriller Writer Wanted, and the job was a year's work on a sculpture project in Sunderland.

Sufficient unto the day is the weirdness thereof; I photocopied the ad, took it home and thought about it. Next day, I phoned a friend and asked if he fancied a trip down to Wearside.

This may have been cheating, perhaps jobby etiquette requires an applicant to keep his distance; I don't know, I'd never had a job before. All I knew was that the project had been in place for a couple of years already, there were sculptures in situ and I wanted to look at the work and perhaps even talk to the sculptors before I made up my mind. There are degrees even to desperation, just as there are concentric circles in hell. 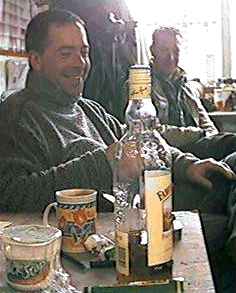 So down to Sunderland we drove, Ian and baby Matthew and myself, and found our way to the compound and the portakabins that housed the project and its people - at that time, Colin Wilbourn and Karl Fisher. There they were, poor lads, sitting all innocence over a cup of tea and a rollie; suddenly two tall men and one small baby descended on them unlooked-for, unannounced. They coped very well, I thought; Karl filled the kettle and washed out a couple of mugs (which may not sound like much, but on a building-site this is a heroic procedure to do with jerry-cans and vast journeys) while Colin took us on a tour of the site.

Actually, at the time it was not so much a building-site as a tabula rasa, a palimpsest. The Tyne & Wear Development Corporation had levelled the ground and all that stood there, from the piers of the bridge to the piers of the shore; what had been traditional heavy industry, shipyards and such was archaeology now, sunk beneath strata of clean hardcore. The redevelopment would include a marina, offices, housing and a new campus for the university; the anxiety was that the local residents would feel utterly excluded, and so lose any sense of possession of the riverbank. The sculpture project had been established in part to set itself against that sense of loss, to root its work within the known and imagined histories of Monkwearmouth, to underline the fact that this was still public space as it always had been. 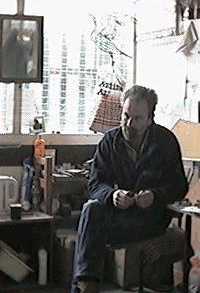 The obvious question was, why on earth were they looking for a crime writer? Ever one to pursue the obvious, I asked it. Colin told us that Jenny Atallah, then literature officer for Northern Arts, had come down for a look around; one of the things Colin said as he showed her the work - one of the things Colin always says about his work - was that he makes narrative sculpture, he feels that there's always a story buried within it, even if he doesn't necessarily know what that story is.

Being ever on the qui vive, Jenny asked if he'd thought about working with a writer. Colin knew about writers in residence, they were always poets; he said no thanks. Jenny suggested someone who actually worked with story, say for example a crime writer. So happens that Colin is very fond of crime fiction; this time he was interested.

Jenny raised the money, established the post, ran the advert. I applied; so did others; half a dozen of us were shortlisted, and went down for a day of introductions and interviews. Of course I was at an advantage, I'd been there before and I'd done a lot of thinking since; I did at least admit it, but it might still have helped.

Whatever, I got the job. Only just, I think, but I got it.

Okay, I know there's nothing so sensationally unique about a man getting a job. When he's thirty-four and it's his first job, that's perhaps a little more interesting, but it does mean that I have no standards to measure this against: nevertheless, I am inclined to insist that being crimewriter-in-residence on a sculpture project is just about the oddest job I've ever come across.

Like Gaul, my residency was divided into three parts. No point in hiring a writer who doesn't write, a writer-in-reticence, no use; I was obliged to produce a book during my year on the project, but that was the least of my worries. Writing books is what I do; I can't claim that it's easy (my union forbids any such assertion), but it is at least familiar ground. 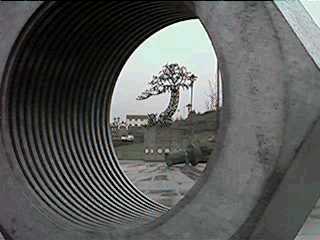 I was also obliged to go out into the community and do good works in schools and history groups and libraries. I confess I do not love this stuff; if I'd wanted to be a teacher, I would have trained for it. There is almost a diametric opposition between facing an attentive world with a lump of chalk in your hand and turning your back on it, facing a wall with a keyboard beneath your fingers. I don't say that anyone ever became a writer because they loved solitude or couldn't cope with people, but as incidental qualifications these are certainly not unusual. Still, I've done enough talking, teaching, lecturing, public works; I might not enjoy it but I knew I could cope.

Which left the final part, the unknown element in the equation, what we were really there to discover: could Colin and I work together, could we find ways to incorporate my text into his work?

It would very much be that way round; his was the established voice on the project, his was the driving vision and I was the incomer. Even so, we were both no more anxious to have me simply describe his work than we were to have him illustrate mine; this must necessarily be a collaboration if it was to work at all.

As it happened, Colin and Karl had only recently embarked on their most ambitious piece to date, the Red House. This would take them all year to complete, which allowed me the time and space to find ways of insinuating myself into the heart of the work, having some influence on its final shape and leaving my words like waymarkers to say where I had been. It took perhaps three months of talking - and, in my case, pacing up and down - in the portakabin before either one of us was comfortable with that process, but in the end we fitted together rather neatly. Whether that was luck or good judgement, or whether Colin could have worked as easily with any other writer, is not knowable; that this relationship did work is certain. I left the project in 1994, but I was called back and asked for words to go with every major piece since, up to and including the final work in 2001. 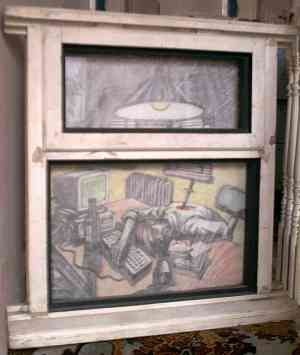 That was the best fun I had, offering up text to be carved in stone, set in concrete, etched in steel or cast in glass. Top memory from the community work must be an exhibition we put together, depicting the progress of a book from original scrawled notes to final publication; we set it up in the form of a murder mystery, Who Killed Chaz Brenchley? I still have a windowframe in my bedroom, through which there's a perfect view of me slumped & bleeding across my desk, with a magnificent dagger in my back.

The other truly happy outcome was the book that grew out of my year on the project. Even before I began, I'd been approached by Flambard Press. At the time they were officially poetry publishers only, but Peter and Margaret Lewis who run the press both have a deep and long-term relationship with the crime writing community; they'd been thinking of branching out, they said, and if so be that my London publishers didn't want whatever I produced from St Peter's, they'd be delighted to publish it. I said that if I wrote a novel, I was fairly sure my regular publishers would want it; but what I'd really like to do would be a book of short stories, and I was equally sure or more so that they wouldn't want that. 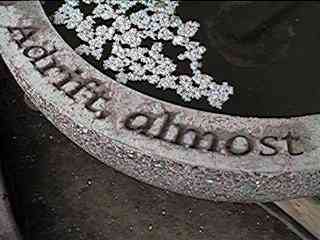 Peter and Margaret did, definitely. So all was for the best, in the best of all possible worlds; I wrote a bunch of short stories (and one very long one) for Flambard, and a novel on the side to keep London happy. The novel was Dead of Light, which remains one of my favourites. Some of the stories appeared in other anthologies first, and one I recorded for transmission on Wear FM; a couple were shortlisted for the CWA Gold Dagger, for best of the year; the eventual collection was called Blood Waters, and is still available in its increasingly rare first edition.

Think of blood and waters, and it's hard not to think of the moon. The project's final sculpture, installed in 2001, is a set of lunar pieces, the phases of the moon caught in concrete bowls with my words around the rims. New words, different words but they still reflect the consistent theme that I found at St Peter's. Tides ebb and flow, moons and planets orbit, gravity sucks and keeps on sucking; and the sum of all this effort is that what goes around comes around, which is what I said in the beginning.

More about the Sculpture Project